Incidental thyroid carcinoma (ITC) is defined as a tumor diagnosed at histology after surgical intervention for a benign thyroid disease and, therefore, without a preoperative diagnosis of malignancy. The prevalence of ITCs reported in the 20 papers of the literature is extremely variable (3.3–21.6%), mostly due to the relatively low number of cases included (Ugolini et al. 2007, Bradly et al. 2009, Barczyński et al. 2011, Minuto et al. 2013, Negro et al. 2013), and scanty molecular data are available (Ugolini et al. 2007). A more accurate estimation of the actual prevalence of ITCs is of particular importance for the preoperative counseling of patients undergoing thyroidectomy for a supposed benign disease. Moreover, the definition of the clinical behavior of this category of tumors is crucial for the choice of the best postsurgical treatments and follow-up.

The aim of this study was to investigate the prevalence, clinical features, and BRAF mutational status of ITCs of any dimension in a large consecutive cohort of patients referred to our Endocrine Surgery Center for benign thyroid disease. The approval of the Ethical Committee was obtained for this retrospective observational study (#139/2013).

Between February 1997 and March 2011, 2045 patients were subjected to thyroidectomy at the Endocrine Surgery Unit for benign disease. The preoperative diagnosis was uninodular or multinodular goiters (MNGs) in 1405 cases, toxic uninodular goiter or toxic MNGs (TMNGs) in 332 cases, Graves' disease (GD) in 300 cases, Hashimoto's thyroiditis in six cases, and iatrogenic thyrotoxicosis in two cases. The preoperative diagnosis was based on a benign cytology observed during ultrasound-guided fine-needle aspiration biopsy (FNAB) performed on either thyroid nodules with suspicious ultrasound features or the largest thyroid nodule if no suspicious features were detected. In TMNGs, only nodules with a normal or reduced uptake were subjected to FNAB. All cases with an indeterminate cytology were excluded. The surgical treatment was total thyroidectomy in 96.5% of the cases. In 42 cases, suspicious lymph nodes were observed during intervention and lymphadenectomy of the central neck compartment (VI level) was performed. Tumors were classified according to the thyroid malignancy World Health Organization classification and staged according to the sixth edition of the TNM staging. Only tumors with an extrathyroidal invasion (i.e. invasion of the thyroid capsule and/or lymph nodes or distant metastases) or with a diameter >2 cm were subjected to radioiodine residue ablation. Criteria used to identify remission or persistent/recurrent disease were drawn on the basis of International guidelines for the management of differentiated thyroid cancer (American Thyroid Association (ATA) et al. 2009).

Neoplastic cells were obtained by laser microdissection from the tumor tissue of patients with a diagnosis of incidental papillary thyroid cancers (PTCs) and BRAFV600E mutation was analyzed by PCR amplification and direct sequencing, as described previously (Fugazzola et al. 2006).

Several outcome predictors were evaluated by univariate and multivariate analyses, by means of χ2-test, t-test, or stepwise multiple regression, as appropriate. Statistical significance was defined as P<0.05. All statistical analyses were performed using SPSS 8.0 statistical package for Windows (SPSS, Inc.).

The clinical and histopathological features of the 249 ITCs are reported in Table 1. In particular, the mean age was 51.7 years (median 52 years) and the F:M ratio was 4:1. The mean tumor diameter was 9.5 mm (median 6 mm), and the papillary histotype was the most prevalent (91.6%). Most cases were classified as T1 (81.9%) and stage I (86.7%); the percentage of infiltrating tumors was around 12%; and multicentricity was found in 36% of the cases. In 16 of the 249 tumor cases (6.4%), the diameter of the malignant nodule was ≥30 mm. In these cases, the preoperative diagnoses were MNGs in 14 cases and TMNGs in 2 cases, and the histological diagnoses were follicular cancer in ten cases, medullary cancer in one case, and papillary cancer in the remaining five cases. This high prevalence of follicular malignant lesions among the larger nodules of this series could account for the preoperative diagnosis of benignity found in the nodules (12/16) subjected to FNAB. Concerning the TMNG category, in 24 of the 33 cases found to have thyroid cancer at histology, FNAB was not performed since the hyperfunctioning nodule was only visible during ultrasound (n=3) or because the diameter of the nodules with a normal or reduced uptake was <7 mm without suspicious features during ultrasound.

Clinical and histopathological features of the 249 incidental thyroid cancer cases. Owing to the absence of a preoperative diagnosis of malignancy, lymphadenectomy was performed only in a minority of cases (n=42), when suspicious lymph nodes were observed intraoperatively

The 175 of 249 patients for whom follow-up data were available were divided according to the remission/persistence of the disease after a mean follow-up of more than 8 years (median 107 months). The large majority of patients (89.7%) were in remission at the last follow-up visit. The clinical features found to be significantly associated with the persistence of the disease were the tumor diameter (P=0.03), tumor extension (P=0.0004), and stage (P=0.001). During the stepwise multiple regression analysis, only stage was confirmed to be statistically significant (P<0.001, data not shown).

The molecular analysis of BRAF was done in 134 of 228 incidental PTC cases, and it revealed a mutation in 12 cases (9%). Among the several clinical parameters, such as age, gender, tumor extension, multifocality, and stage, BRAFV600E mutation was found to be associated only with a larger tumor diameter (P=0.02, data not shown). Accordingly, on classification of pT1 tumors, BRAF was less frequently mutated in pT1a tumors with respect to pT1b tumors (6 vs 18%, P=0.07). Similarly, on separating tumors with a diameter ≤10 mm from the larger tumors of any diameter, the prevalence of BRAFV600E mutation was found to be significantly higher in the latter group (6 vs 21%, P=0.02).

In conclusion, a 12.2% overall prevalence of ITCs was found in the present large series of 2045 consecutive patients subjected to thyroidectomy for benign thyroid diseases. A lower mean prevalence (9.3%) was found among the studies published to date on ITCs in benign thyroid diseases (Ugolini et al. 2007, Bradly et al. 2009, Barczyński et al. 2011, Minuto et al. 2013, Negro et al. 2013). The extreme variability observed among the different series could be due to the relatively low number of cases enrolled (<1000 in 17 of 20 series). In 71 of the 249 cases (28.5%), tumor diameter was >10 mm, but the tumor was not preoperatively diagnosed due to pitfalls in the cytology or more frequently due to the presence of larger nodules in the same goiter. Thus, this finding supports the reported indication to perform FNAB in up to four nodules to exclude cancer in a MNG (Frates et al. 2006).

Interestingly, a high prevalence of ITCs was found in MNGs (13.4%) with respect to hyperfunctioning benign diseases (9.9% in TMNGs and 9.3% in GD), consistent with the mean data obtained from the revision of the literature (9% in MNGs, 7.2% in TMNGs, and 6.7% in GD). These data further confirm the results, indicating that lower levels of TSH are associated with a lower risk of PTC in patients with nodular thyroid disease (Fiore et al. 2009).

ITCs were comparable to clinically evident tumors for several features, such as age, gender, histotype, and prevalence of multifocality. The significant association between persistent disease and tumor extension and stage was also consistent with data reported for clinically diagnosed thyroid cancers. In contrast, the mean tumor diameter of ITCs was nearly 1 cm, and a larger volume was significantly associated with a persistent disease. In the present series of ITCs, the analysis of BRAF was performed for the first time. Interestingly, though clinically similar, ITCs resulted to be different from non-incidental tumors from a molecular point of view. Indeed, the mean prevalence of BRAFV600E mutation in non-incidental tumors was 40–50% (Fugazzola et al. 2006, Xing 2007), whereas in the present series, the mutation was found in 12 of 134 (9%) cases. The analysis of BRAF in ITCs has been reported previously in only one study, which was limited to 85 tumors of diameter <4 mm and documented mutations in 15 of 85 (17.6%) cases (Ugolini et al. 2007). This prevalence is similar to that observed in the present study only for TMNGs (15.4%), with the difference in the overall frequency being probably due to the different size of the series. The lower prevalence of mutations in ITCs with respect to clinically evident cancers could be related to the lower volume of incidental cases, consistent with the present finding that BRAFV600E mutation is significantly associated with tumor diameter. Nevertheless, it must be considered that around 80% of all thyroid cancers measure 20 mm or less and that BRAF was found to be mutated in 30–40% papillary microcarcinoma cases (Xing 2007) and in 44.6% of cases in a large cohort of PTCs of diameter <20 mm (Basolo et al. 2010). Thus, it is tempting to speculate that the low prevalence of BRAFV600E mutation in ITCs indicates that the majority of them harbor a low aggressiveness.

In conclusion, the analyses on the present large series indicated that ITCs have a median diameter of 6 mm, are mostly T1 and stage I papillary tumors, and multifocal in around 35% of the cases, with a remission rate of 90%. The low prevalence of BRAF mutations further supports their indolent behavior and their reduced tendency to evolve into manifest tumors, indicating that no aggressive treatments are warranted for the majority of them.

This research did not receive any specific grant from any funding agency in the public, commercial or not-for-profit sector. 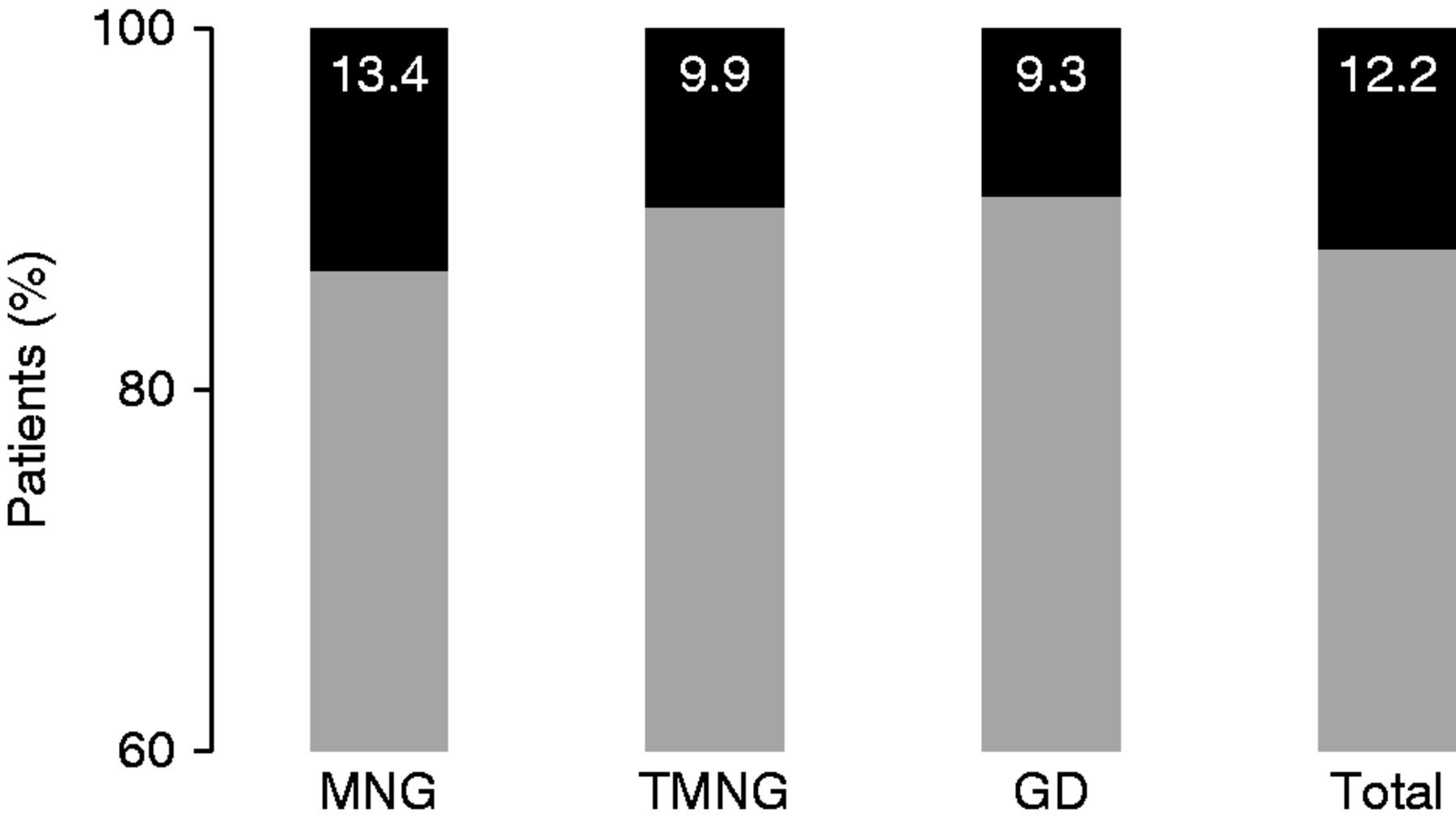