ATRX interacts with DNA methyltransferases 3A and 3L (DNMT3A/3L), known as ATRX-DNMT3A-DNMT3L (ADD) (Hashimoto et al. 2010). DNMT3A and its accessory protein, DNMT3L, contain a histone H3 lysine 4 (H3K4) methyl-interacting ADD domain which links DNA methylation with unmodified H3K4. This interaction is one of the three described protein domains that provide a functional link between DNA methylation and histone modification. These interactions are pivotal for maintaining accurate replication of histone methylation patterns in newly replicated chromatin and in the subsequent fidelity of gene expression. ATRX interacts directly with DAXX, which functions as a chaperone for the deposition of the histone variant H3.3 at repeat sequences across the genome, including CpG islands and telomeric, pericentric and ribosomal repeats (Clynes et al. 2013). DAXX is a highly specific histone chaperone that discriminates H3.3 from other H3 variants. Mutually exclusive mutations in ATRX and DAXX are also found in neurological tumours, including neuroblastomas, paediatric glioblastomas, oligodendrogliomas and medulloblastomas (Clynes et al. 2013). Notably, H3.3 is mutated in paediatric glioblastoma and bone tumours, and H3.3 mutations are often associated with changes in global DNA methylation (Salomoni 2013, Maze et al. 2014).

Because of the known interaction between ATRX and DNMT3A/3L and the interplay between ATRX and DAXX, it is likely that PNETs with a loss of these tumour suppressor genes would have different genome-wide DNA methylation patterns as compared to those tumours that retain this function.

Only ATRX/DAXX-positive tumours and tumours with a loss of either ATRX or DAXX were considered. Included in the study were 12 age-matched, normal control pancreatic tissue samples (endocrine and exocrine) because of the extreme rarity of isolated pancreatic islet cell samples. Cases that showed heterogeneous ATRX or DAXX loss were also excluded so as to avoid difficulties in drawing firm conclusions.

In total, 53 formalin-fixed paraffin-embedded tumour specimens (46 primaries and seven liver metastases from 39 cases) were included in this study (Fig. 1A). Of these, 27 specimens (51%) had lost either ATRX (n=9; 33%) or DAXX (n=18; 67%) protein expression, as determined by immunohistochemistry (Anti-ATRX (SAB4502258) and Anti-DAXX (HPA008736) antibodies (both rabbit polyclonal) were provided by Sigma–Aldrich). Endothelial cells that stained positive for ATRX and DAXX served as the internal control in each immunochemistry section from cases that lacked expression of the corresponding protein. Seven of 26 (27%) low-grade primary tumours (G1, ki-67 of <2%) exhibited ATRX/DAXX loss as compared to 13 of 19 (68%) intermediate-grade tumours (G2, ki-67 2–20%) (P=0.008, Fisher's exact test). One G3 and six of seven metastatic specimens also exhibited ATRX/DAXX loss.

PFS, progression-free survival; OS, overall survival; NA, not available. The three samples from case 37 are different regions of the same surgical pathological specimen. However, because of intra-tumoral heterogeneity, we observed that one sample was ATRX-negative, whereas the remaining two were ATRX/DAXX-positive. For this reason, case 37 was not considered in the survival analysis.

Depending on the different pair-wise comparisons, certain samples that had been assigned to unique arrays had to be removed to allow for the correction of the batch-to-batch variation which occurs when running the Illumina 450K HumMeth array. Comparison between all ATRX/DAXX-negative and ATRX/DAXX-positive tumours identified 58 methylation-variable positions (MVPs). Independent comparisons of either DAXX-negative (n=18) or ATRX-negative (n=7) with ATRX/DAXX-positive tumours (n=23) revealed 4352 MVPs and 34 differentially methylated regions (DMRs) and 258 MVPs and one DMR respectively. When ATRX-negative and DAXX-negative tumours were compared, we identified 196 195 MVPs and 6708 DMRs. Taken together, these observations demonstrate that genome-wide DNAm changes are associated with a loss of DAXX expression and not a loss of ATRX. A Benjamini–Hochberg (BH) adjusted P value of <0.05 that corrected for multiple testing (false discovery rate) was used throughout the various comparisons in order to identify significantly methylated variable positions.

When ATRX-negative and DAXX-negative tumours were compared as one group to normal pancreatic samples, we identified 133 938 MVPs (BH adjusted P value <0.05) and 4664 DMRs. A heat map that plotted the top 1000 MVPs for this comparison demonstrated that tumours were separated primarily by grade and then by ATRX or DAXX status (Fig. 1D). This was further confirmed by the unsupervised clustering of G2 tumours (eight DAXX-negative and five ATRX-negative cases) alone against normal pancreatic control samples for the top 1000 MVPs (Fig. 1E).

Of the 26 ATRX/DAXX-negative tumours (Fig. 1D), 20 samples (77%) were grouped into a distinct cluster. However, six ATRX/DAXX-negative tumour samples had intermediate methylation profiles and clustered with the normal control pancreatic samples (Fig. 1D). Of them, five were DAXX-negative (four G1 and one G2 tumours), and one was ATRX-negative (a G2 tumour). When comparing G2 tumours vs normal pancreas, there were 127 683 MVPs (adjusted P value <0.05) and 4337 DMRs. However, for G1 vs normal pancreas, 31 480 MVPs and 300 DMRs were identified. This indicates that low-grade (G1) tumours and normal pancreas have similar methylation profiles.

This is the first study of genome-wide DNA methylation in ATRX/DAXX-positive and ATRX/DAXX-negative PNETs. The finding of a higher incidence of ATRX and DAXX loss in intermediate-grade (G2) tumours may account for the worse PFS and OS previously observed (Marinoni et al. 2014); however, this finding requires validation in a separate clinical cohort.

Genome-wide DNA methylation analysis identified significantly more MVPs in DAXX-negative vs ATRX/DAXX-positive tumours as compared to ATRX-negatives vs ATRX/DAXX-positive tumours (4352 and 258 respectively). This suggests that DAXX deficiency drives genome-wide methylation changes, potentially through the functional loss of H3.3 deposition (which binds DAXX in a highly specific manner and loads it into DNA, whereas ATRX is a co-factor that is involved in DAXX targeting chromatin) and also through binding with the maintenance DNA methyl transferase DNMT1 (Salomoni 2013). Mutations in H3.3 occur commonly in paediatric brain tumours (Maze et al. 2014) and are known to lead genome-wide methylation changes. Because ATRX interacts with the de novo DNA methyl transferases DNMT3A/3L, its impact on genome-wide methylation in ATRX-deficient PNETs is less marked.

In addition to investigating genome-wide DNA methylation changes, CNV was determined from the non-normalised methylated and unmethylated signal intensities of the 450K array probes as previously described (Feber et al. 2014). In keeping with previously reported data in PNETs (Marinoni et al. 2014) and other solid tumours, we found a higher incidence of CNV alterations in tumours that had lost ATRX and DAXX (Heaphy et al. 2011). We also demonstrated that ATRX/DAXX-negative tumours have a poorer PFS as compared to ATRX/DAXX-positive cases (30 vs 85%, P=0.0009) and that DAXX-negative tumours have the poorest 5-year PFS overall (16%, P=0.0005).

We demonstrated that even though they have mutually exclusive mutations, ATRX- and DAXX-deficient PNETs have distinct genome-wide DNA methylation profiles. Loss of DAXX and not ATRX appears to be the driver event in altering genome-wide methylation changes in PNETs. Previous studies have analysed PNETs with ATRX and DAXX loss in a single cohort, because mutations in these genes are predominantly mutually exclusive. These findings are also relevant to other neurological tumours which are driven by ATRX and DAXX loss.

Finally, we demonstrated that DAXX-negative tumours have the poorest 5-year PFS, and we therefore suggest more aggressive disease course. However, further validation of these findings is warranted in a separate clinical cohort.

(A) Details of the study cohort. (B and C) Kaplan–Meier survival curves for ATRX- and DAXX-negative cases (n=17) as compared to ATRX/DAXX-positive cases (n=17) and ATRX-negative (n=8) and DAXX-negative (n=9) cases analysed independently and compared to ATRX/DAXX-positives cases respectively. The 5-year PFS was 85% for positive cases, 52% for ATRX-negative cases and 16% for DAXX-negative cases. (D) Unsupervised cluster analysis using the top 1000 MVPs that showed segregation of ATRX-negative (in green) and DAXX-negative (in orange) tumours as compared to normal pancreatic tissue. Of the six ATRX/DAXX-negative tumour samples (from six cases) that clustered with the normal control pancreatic samples, only one case (G1, DAXX-negative) progressed (PFS 51 months), and two cases had no follow-up data. Of the six metastatic samples included in this study, two of them (both DAXX-negative) had a matched G1 tumour sample. One of them grouped tightly with the G1 primary tumour. DNA methylation values (β-value 0–1) are represented using a colour scale, where yellow=low methylation and blue=high methylation. Samples are shown on the x-axis, and probes are shown on the y-axis. (E) Confirmation of tumour segregation primarily by grade and then by ATRX or DAXX status using the top 1000 MVPs. (F) Copy number variation (CNV) profiles associated with low and intermediate PNETs. The top panel demonstrates increasing CNV across the genome for low-grade (G1, ki-67 <2%) tumours, with the least CNV occurring in the ATRX/DAXX-positive primary (left). Increasing CNV alterations are seen in the ATRX/DAXX-negative tumour (middle) and most CNV alterations occur in the ATRX/DAXX-negative G1 liver metastasis (right). The same is observed in intermediate grade (G2, ki-67 3–20%) tumours in the bottom panel. Segmented copy numbers are shown as a red line, and sequential chromosomes are shown in green and black (chr. 1–22). 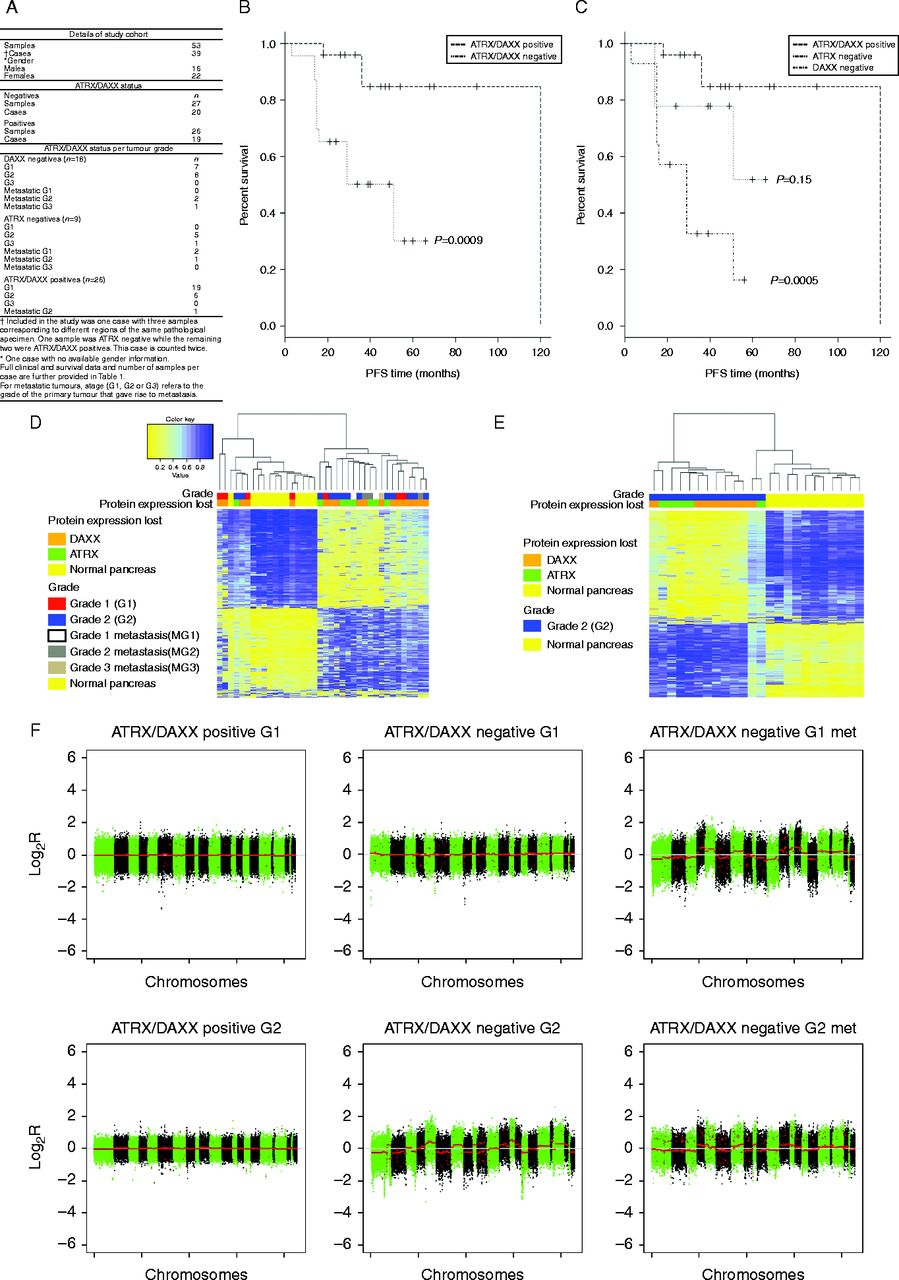