Pheochromocytomas and paragangliomas (PPGL) are rare neuroendocrine tumors arising from the adrenal medulla and extra-adrenal paraganglia, respectively. Forty percent are explained by germline mutations in known susceptibility genes. Furthermore, somatic mutations were identified in an additional 30% of PPGL, mostly in NF1, RET, VHL, MAX and HRAS. However, screening is limited to a few studies mainly using Sanger sequencing (Burnichon et al. 2011, 2012, Crona et al. 2013, Luchetti et al. 2015, Weber et al. 2012). Our aim was to look for the prevalence and nature of somatic mutations using a targeted deep-sequencing approach in patients from a Belgian multicentric PPGL cohort. Targeted Next Generation Sequencing was performed in 74 tumors using a panel including 17 susceptibility genes. Variants considered as damaging by at least 5 prediction programs, or present in COSMIC and considered as damaging by at least 3 prediction programs, were considered to be disease-associated mutations. Somatic mutations were identified in 54% of patients. The most frequently mutated genes were NF1 (20.8%) and KIF1B (20.4%). While the high prevalence of somatic mutations in NF1 is in agreement with previous studies, the similarly elevated prevalence of mutations in KIF1B is novel.

Tumor and corresponding blood samples or normal adrenal gland tissue were available for 74 PPGL consecutive patients (55 paraffin-embedded and 19 frozen samples). The mean age at diagnosis was 45.4 ± 16.2 years, and 55% were females. Forty-seven tumors (63%) were pheochromocytomas (PCCs), and among the 27 paragangliomas (PGLs), 23 (85%) were located in the head and neck region. Seven (9%) PPGLs were multifocal, 10 (13%) were recurrent, 6 (8%) were malignant, because of evidence of metastasis, and 7 (9%) patients had a familial history of PPGL. None of the patients had features suggestive of Multiple Endocrine Neoplasia 2, Von Hippel-Lindau disease or Neurofibromatosis. Fourteen patients (15%) harbored a previously identified germline mutation: 9 SDHD, 2 SDHB, 1 SDHA, 1 VHL and 1 MAX. The study was approved by the Comité d’Ethique Hospitalo-Facultaire des Cliniques universitaires Saint-Luc-UCL (CEHF).

Sequences, generated by PGM, were aligned into BAM files by the Torrent Server. Aligned sequence (BAM) files were submitted to the Torrent Variant Caller for variant calling (Life Technologies). Variants were annotated, filtered and visualized using Highlander, an in-house bioinformatics framework (Helaers R, Brouillard P, Soblet J, Amyere M, Limaye N & Vikkula M, unpublished observations; http://sites.uclouvain.be/highlander/). The called variants were retained if they passed the following criteria: (1) absent from germline DNA of the same patient, (2) total depth of coverage of ≥100 reads at the variant-position, (3) ≥1% variant-allele frequency and (4) ≥5 mutant reads, with at least one forward and one reverse read. Somatic variants that passed these criteria were evaluated as follows: (1) Synonymous somatic variants were discarded; (2) somatic variants present in >5 alleles in Genome of the Netherlands (GoNL) and in >10 alleles in 1000 Genomes were discarded; (3) somatic variants present in >20% of all the sequenced PPGL tissues were discarded; (4) visual inspection of all remaining somatic variants was performed using the Integrated Genome Viewer (IGV; Broad Institute). Somatic variants within homopolymers, known to be error-prone using this technology, were discarded. Finally, only the somatic variants having a z-score ≥5 were retained. Z-scores were calculated separately for frozen and FFPE tissues, as described by Soblet et al. (2017). Missense somatic mutations were submitted to six programs (Polyphen2, SIFT, Mutation Taster, Mutation Assessor, Functional Analysis though Hidden Markov Models or FATHMM, Likelihood Ratio Test or LRT, all implemented in Highlander) to predict their effect on protein function. The somatic variants predicted as damaging by ≥5 programs or by ≥3 programs and present in the COSMIC database were considered as somatic mutations.

The main results of our study can be summarized as follows. Somatic mutations were identified in 40 patients (54%), only 8 of which carried a germline mutation (6 SDHD, 1 SDHB and 1 MAX) (Fig. 1). Using gene expression profiling, PPGLs can be classified in two clusters: Cluster 1 (hypoxia cluster) containing SDHx-, FH- and VHL-related tumors, and Cluster 2 (kinase signaling cluster) including MAX-, NF1-, RET- and TMEM127-mutated PPGLs (Burnichon et al. 2011). Mutations were more frequent in genes involved in Cluster 2 than in Cluster 1 (58% vs 42%, P value = 0.003). The average number of mutations per patient was 7.9 ± 19.4 (Fig. 2A). The most frequently mutated genes were NF1 and KIF1B. Indeed, mutations in these two genes accounted for 21% and 20% of the total number of mutations, respectively (Fig. 2B). Furthermore, mutations in NF1 and KIF1B were found in 28% and 19% of all patients, respectively (Fig. 2C). In addition, a Burden test, comparing the proportion of variants found in our samples and the ones reported in the ExAC database, could be performed using Highlander. For both genes, the proportion of rare, damaging variants, as defined above, was higher in patients than in ExAC (P values <0.001). Finally, even though KIF1B has a shorter coding region than NF1 (5.4 kb vs 8.5 kb), both genes carried almost the same number of mutations (65 and 66, respectively); the density of mutations is therefore higher in KIF1B than in NF1 (11.9 mutations/kb vs 7.7 mutations/kb).

In conclusion, using a panel including 17 susceptibility genes, we documented the presence of somatic mutations in over 50% of PPGL tumors. We confirmed the high frequency of NF1 somatic mutations and identified KIF1B as the second most frequently mutated gene in PPGL tissues. Welander and coworkers reported a substantially lower frequency of KIF1B mutations (4%) (Welander et al. 2014). This is likely due to the variant-allele frequency threshold set at 10% in the work of Welander and coworkers, while we looked at variants present in ≥1% of the reads. Nowadays, the 1% variant-allele frequency threshold is commonly used in somatic mutation analyses (Limaye et al. 2015). Finally, RET mutations were found in more than half of mutated patients with head and neck PGL.

Interestingly, we identified a minority of samples with a high number of somatic mutations, which may reflect perturbations in DNA damage repair, and, as such, deserve a more in-depth investigation (Alexandrov et al. 2013). Hypermutated tumors have never been reported in PPGL, but are well described in other tumors, such as adrenocortical carcinomas (Assie et al. 2014). Genetic profiling of PPGLs may therefore help to individualize management and therapy of these tumors. 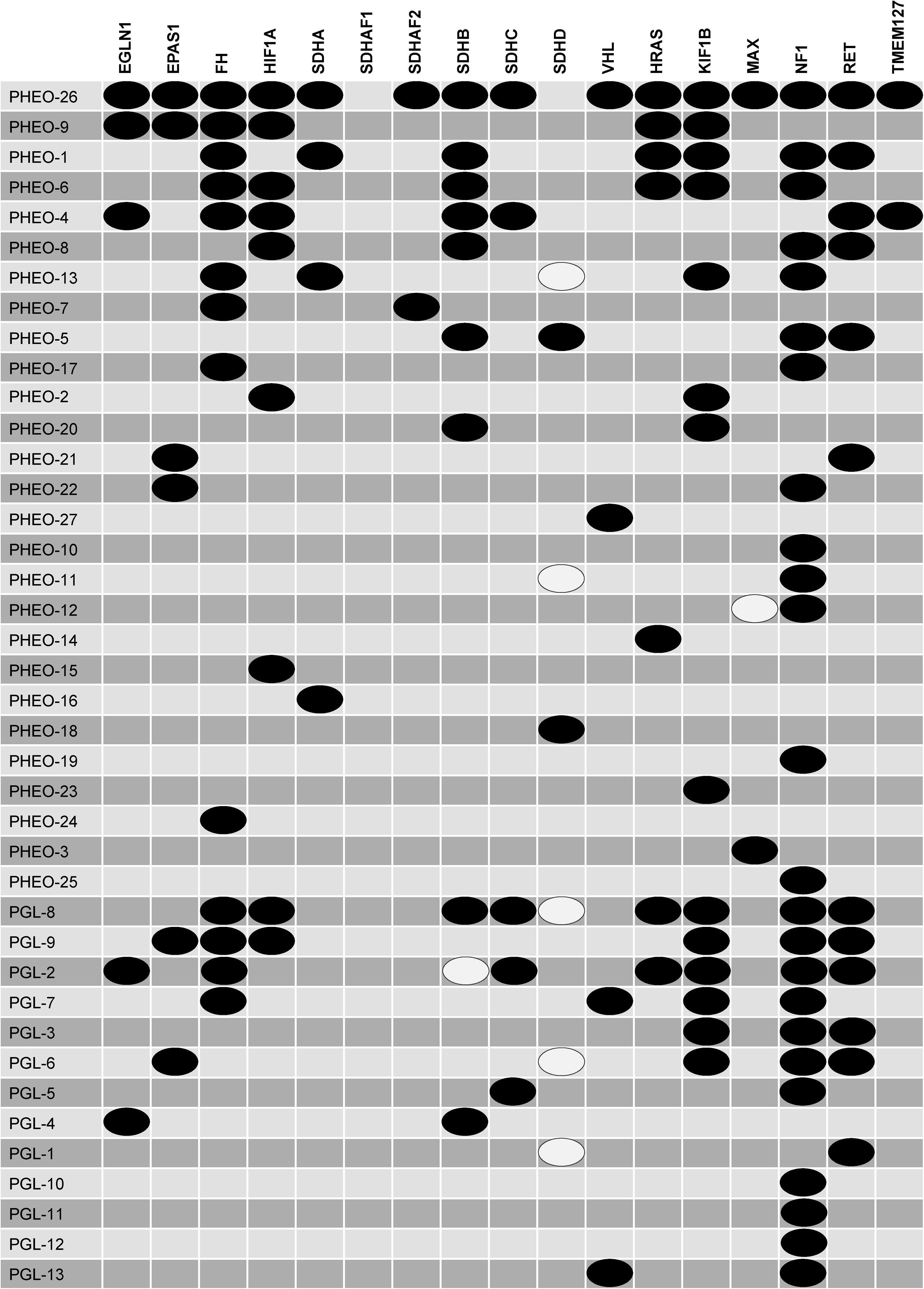 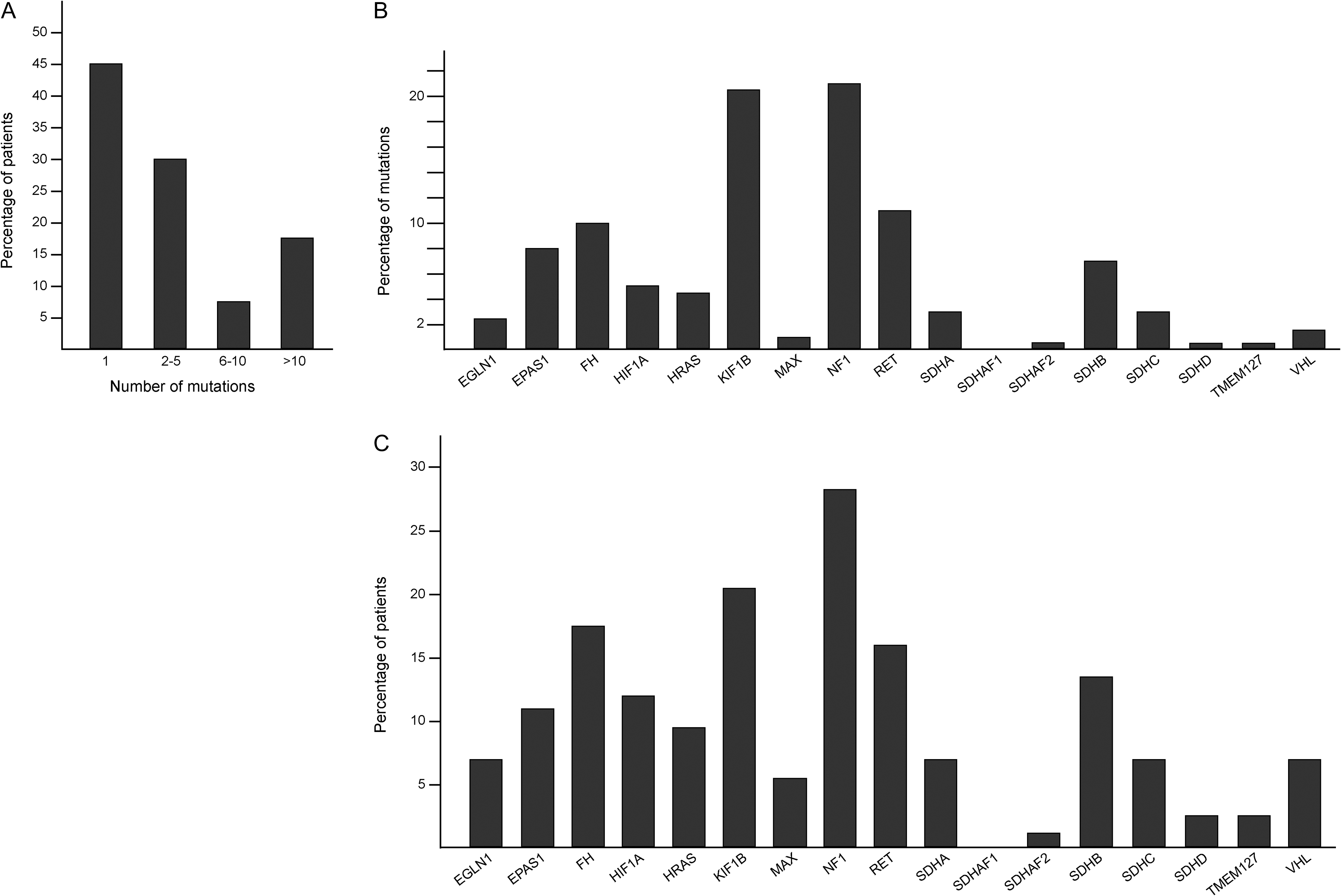