Pheochromocytomas and paragangliomas (PCCs/PGLs) are tumors in the adrenal medulla and extra-adrenal ganglia, respectively. About a quarter are metastatic, often with a long latency period. Some PCC/PGLs are defined as clinically aggressive given extensive local invasion into adjacent normal tissue. These tumors, like metastatic PCC/PGL, cannot be surgically cured, and patients can have continued secretion of excessive catecholamines with all related sequelae. For patients with metastatic or aggressive tumors, treatment options are limited. External beam radiation can provide local control (Fishbein et al. 2012, Vogel et al. 2014). Systemic therapy includes radionucleotide treatment with 131I-MIBG or chemotherapy with cyclophosphamide, vincristine and dacarbazine (CVD), both of which have a limited progression-free survival (PFS) and limited complete or partial regression rates based on meta-analyses (Niemeijer et al. 2014, van Hulsteijn et al. 2014). Because 131I-MIBG is not uniformly available, CVD is the mainstay of systemic treatment, although predictors of response remain limited. Our objectives were to describe the clinical characteristics of a cohort of patients with malignant PCC/PGL and to determine CVD-specific PFS in order to make recommendations regarding clinical management.

We performed a retrospective IRB-approved study of all patients with PCC/PGL seen at the Hospital of the University of Pennsylvania Neuroendocrine Tumor (NET) Center between January 2000 and August 2016. Malignant PCC/PGL was defined as the presence of distant metastases or extensive unresectable local invasion into adjacent organs or tissues. Demographic information was collected including dates of initial diagnosis, metastatic disease, treatment initiation and clinical progression. When dates with only month or year were available, data was imputed to the mid-day or month. Not all patients had imaging studies performed at our institution; therefore, we could not use Response Evaluation Criteria In Solid Tumors (RECIST) criteria to define progression. Instead, progression was defined as clinical disease progression, initiation of subsequent treatment modality or death due to disease. Our clinical practice is to refer all patients with PCC/PGL seen in the NET Center for genetic counseling and testing (Fishbein et al. 2013). However, not all patients had clinical genetic testing, especially in the first half of the time period.

We next examined for markers to help predict survival. There was no difference in median OS between males and females (P = 0.9473). Median OS did not differ between the SDHB mutation carrier group and others from either initial or metastatic diagnosis (P = 0.8931 and P = 0.8728, respectively), likely due to the small sample size. However, the primary tumor location was significantly associated with OS from initial and metastatic diagnosis (P = 0.0055 and P = 0.0373, respectively) (Fig. 1C and D). Whereas the group of patients with adrenal PCC or head-and-neck PGL did not reach the median OS, the group of patients with extra-adrenal PGL had a shorter median OS from both initial and metastatic diagnosis (13.58 and 6.81 years, respectively).

Of the 23 patients who had at least one full cycle of CVD chemotherapy, 11 had SDHB mutations, one had an NF1 mutation, eight had no identified mutation and three were not tested. All 23 patients had distant metastases at the time of CVD initiation. Interestingly, patients with a SDHB mutation had a longer median PFS after CVD than those without a SDHB mutation (23.67 (95% CI 12.03–36.5) vs 5.17 (95% CI 0.33–9.7) months, respectively (P = 0.001)) (Fig. 1E and F). No other treatments (surgery or MIBG) were given while patients received CVD. Furthermore, there was no difference in the mean time from diagnosis of metastatic disease to initiation of CVD between the SDHB and non-SDHB groups (30.5 vs 37.2 months, respectively, P = 0.6789). Although these results must be interpreted cautiously given the small sample size, these data suggest that further investigation is warranted to determine if specific subsets of patients with metastatic PCC/PGL will respond better to certain treatments. These data also underscore the necessity for germline mutation testing in all patients with PCC/PGL as it may provide prognostic information not just for surveillance of primary PCC/PGL, recurrence and metastatic disease but also perhaps for treatment response. An important limitation of our study is the lack of radiologic images to use RECIST criteria to determine PFS. However, it is worthy to note that clinically significant progression may be defined as need for initiation of therapeutic intervention.

The idea that subgroups of PCC/PGL might respond differently to various treatment options is not surprising. SDHB-associated PCC/PGL are more likely to be extra adrenal, and the tumors are often larger in size at time of diagnosis, believed to be partially due to potential dedifferentiation with associated lower production of catecholamines hindering diagnosis (Eisenhofer et al. 2012). We hypothesize that this dedifferentiation in SDHB-associated tumors allows for increased proliferation and a better response to chemotoxic therapies. Prior work has suggested a differential response to other systemic treatments for SDHB mutation carriers versus others. Retrospective studies looking at response to sunitinib or temozolamide both found trends toward longer PFS in SDHB vs non-SDHB mutation carriers (Ayala-Ramirez et al. 2012, Hadoux et al. 2014). In our cohort of 71 patients with metastatic disease, only two received sunitinib and two temozolamide, preventing a similar analysis; however, the results from our study support similar findings for SDHB mutation carriers in response to CVD. A recent retrospective study found that subjects treated with CVD could be divided into two groups, responders and non-responders (Asai et al. 2017); however, this study did not have germline genetic data to determine if this corresponded with SDHB mutation status.

In conclusion, our data confirm the need for lifetime surveillance for patients with primary PCC/PGL given the potential for metastatic disease even 44 years after initial diagnosis. We suggest that surveillance for patients who have had resection of a primary non-metastatic PCC/PGL should include at minimum annual biochemistries, with the addition of whole-body MRI biennially for susceptibility gene mutation carriers; however, this should be individualized depending on risk characteristics including tumor size and location, biochemical secretion pattern, and pathology. Our data also suggest that despite SDHB mutation carriers being at high risk for developing metastatic disease, these patients may respond better to CVD than non-mutation carriers. If these results are confirmed in larger prospective cohorts, this could affect choice and possibly timing of chemotherapy in SDHB patients with consideration to giving CVD earlier in the treatment plan to SDHB mutation carriers.

Overall survival and progression-free survival for patients with metastatic PCC/PGL. Overall survival for the entire cohort from initial (A) or metastatic disease diagnosis (B). Overall survival from initial (C) or metastatic disease diagnosis (D) based on primary tumor site of origin. Patients with tumors in more than one location (n = 4) were excluded from analysis in panels C and D. Progression-free survival after CVD chemotherapy for the entire cohort (E) or based on SDHB mutation (F). Patients not tested for germline mutation status (n = 3) were excluded from analysis in panel F. 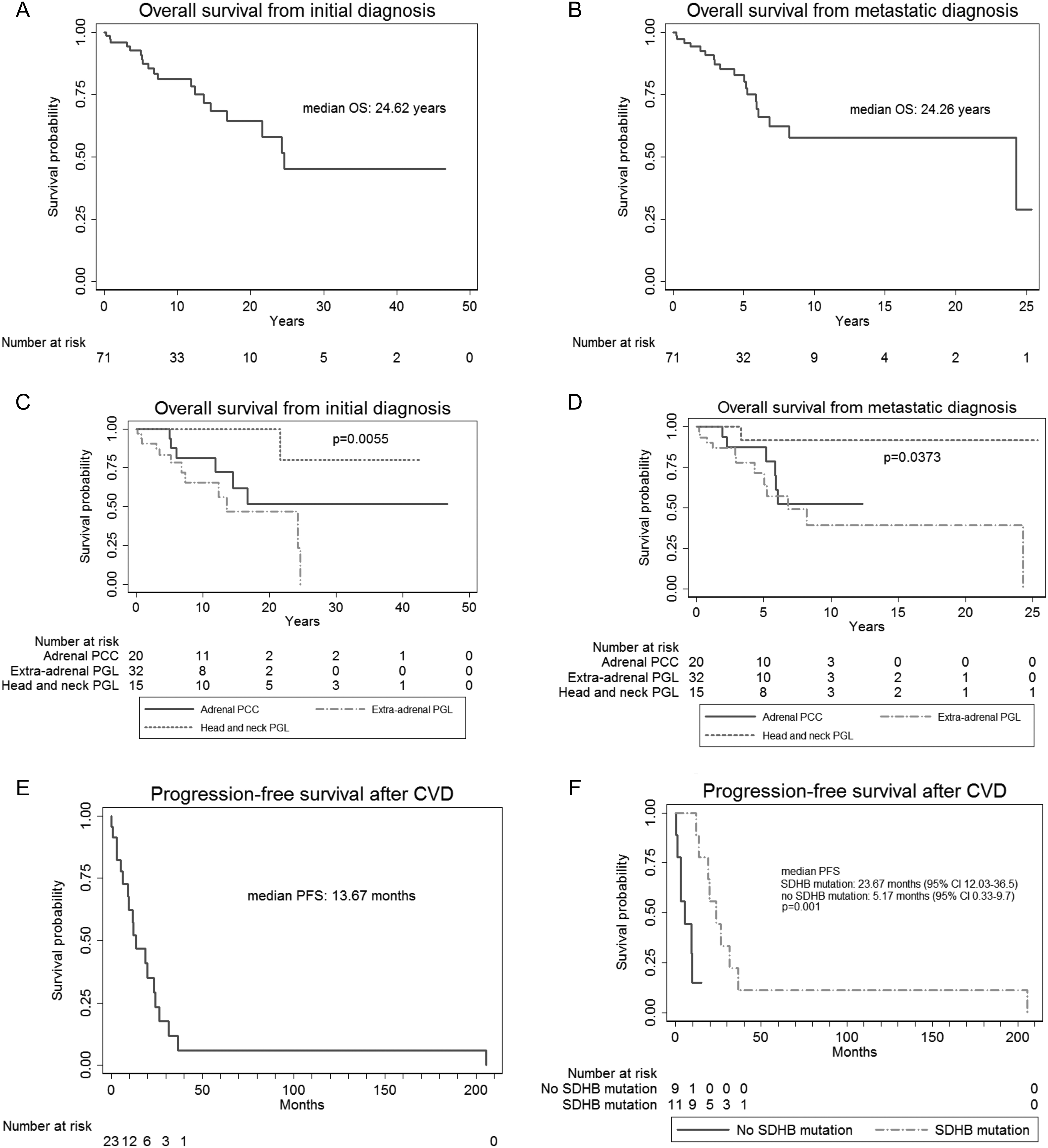