Towards optimal personalized diet and vitamin supplementation in NET patients

Patients with a neuroendocrine tumor (NET) often have gastrointestinal complaints, leading to impaired absorption of critical food components such as vitamins. The aim of this feasibility study is to explore if ‘personalized dietary advice and supplementation of deficient vitamins’ (DIVIT) is feasible in NET patients using a SSA to perform a well-powered clinical trial. In this feasibility study, fifteen NET patients using a SSA for over 6 months got the intervention DIVIT. Feasibility was assessed by calculation of participation/dropout rate and number of intervention-related adverse events. Results showed a participation rate of 75% and dropout rate of 17%. No intervention-related adverse events occurred. We conclude that DIVIT is feasible in NET patients using a SSA. Results from this study will support the development of a well-powered clinical trial.

NET patients experience a lower quality of life (QoL) as compared with the general population, among others, due to increased bowel movements (Pearman et al. 2016). Strikingly, little is known about how NET patients using a SSA should be best supported with dietary advice or supplementation of vitamins. The aim of this feasibility study is to explore if DIVIT is feasible in NET patients using a SSA. Results from this study will support the development of a well-powered clinical trial.

Eligible participants were adult patients with NET grade 1 or 2, treated at the University Medical Center Groningen (UMCG), receiving a SSA for more than 6 months and were proficient in Dutch. Patients with serotonin-producing tumors and with non-serotonin-producing tumors were included. Patients with a life expectancy of less than 3 months, a history of another malignancy or planned for abdominal surgery were excluded. The study was approved by the medical ethical committee of the UMCG and registered in ClinicalTrials.gov (Nbib2481804). All patients gave written informed consent. Measurements were performed at baseline (T0), week 4 (T4) and end of the study (T18). During the first 4 weeks, standard care was continued. Thereafter, patients started with DIVIT. Dietician consultations were conducted at T4 by 1 out-patient visit and after 5, 10 and 15 weeks by telephone. Vitamin supplementation started at T4 or at week 8. The intervention, DIVIT, was based on the patients’ individual situation and on Dutch Guidelines and provided patients insight in how they could adjust their diet to obtain a healthy diet leading to less gastrointestinal symptoms (Gezondheidsraad 2006). For a vitamin plasma vitamin K1 < 0.8 nmol/L, oral phytomenadione once daily 2 mg during 2 months was supplied (Jagannath et al. 2015). For a plasma vitamin A <0.8 μmol/L, retinol 25,000 IU once daily during 2 weeks, followed by 5000 IU once daily was supplied, until sufficient values were reached. Patients with a plasma 25-OHvit D <50 nmol/L were treated with 800 IU cholecalciferol once daily, chronically. Furthermore, if patients had plasma vitamin E < 19.2 μmol/L, alpha-tocopherol acetate 100 mg once daily was supplied, until sufficient values. In case patients had tryptophan in PRP <40 μmol/L, nicotinamide once daily 250 mg was supplied. Vitamin B12 was supplied if plasma levels were <145 pmol/L with a starting dose of hydroxocobalamin 1000 µg 2 times a week intramuscular during 1 month, followed by 1000 µg once in 2 months (Brink et al. 2014).

The primary outcome; feasibility, was assessed by calculation of participation/dropout rate and number of intervention-related adverse events. At baseline, patient- and illness-related characteristics were collected by examination of the medical records.

QoL was measured with the European Organisation for Research and Treatment (EORTC) questionnaire for gastrointestinal NET (QLQ-GINET21) and for cancer patients the QLQ-C30. General distress and distress from problems were measured with the distress thermometer and problem list (PL). Empowerment was measured with four domains of the Dutch version of the Construct Empowering Outcomes (CEO) questionnaire. The Patient-Generated Subjective Global Assessment (PG/SGA) was used to measure patients’ nutritional state.

Vitamin A, D, E, K1, B12 in plasma were analyzed. Tryptophan levels in patients and serotonin levels for routine analysis were assessed in PRP samples (Kema et al. 2001). 24-h Urine was used for analysis of 5-hydroxyindolacetic acid and N1-methylnicotinamide (N1-MN), the main metabolite of vitamin B3, (Bouma et al. 2016).

Mean and standard deviation (s.d.) for normal distribution and median and interquartile range for other distributions were calculated. The scores of questionnaires were calculated according to corresponding guidelines. Mean scores were used for each domains of the PL and CEO questionnaire. Effect sizes (ES) for difference in scores on each endpoint of the EORTC questionnaires, PL and PG-SGA, proportion of patients with normal vitamin values, and ES of the outcomes of CEO were determined with Cohen’s d. An ES of 0.20–0.50 is defined as small, between 0.50 and 0.80 as medium and ≥0.80 as large. Analyses were performed with SPSS, version 23 for windows (SPSS).

Twenty-four NET patients were invited to participate between May 2015 and October 2015. Eighteen patients were included and fifteen completed the full study, giving a participation rate of 75% and a dropout rate of 17%. Baseline characteristics of patients that completed the study are shown in Table 1. Hospital admission occurred in three patients for non-study-related adverse events.

No or only a small effect was found on most items of QoL as measured by the EORTC QLQ-GINET21 and EORTC QLQ-C30. Only the item ‘body image’ of the QLQ-GINET21 worsened after intervention (ES = 0.71). ‘Pain’, improved after intervention with a medium effect size, and emotional functioning was negatively affected by DIVIT (ES = 0.59). The distress thermometer and PL showed an increase in practical problems (ES = 1.17) and a decrease in physical problems (ES = 0.79) during intervention. Furthermore, the empowerment decreased on the domain ‘relation with physician’ (ES = 0.58), ‘feel better informed’ (ES = 1.04) and ‘confidence in treatment’ (ES = 0.98). A negligible effect (ES = 0.15) was seen on nutrition state measured with the PG-SGA. At the start of intervention, nine patients had vitamin deficiencies. Despite DIVIT, which improved vitamin levels in 5 patients, 7 patients had deficient vitamin levels after the intervention (ES = 0.13) (Fig. 1).

This is the first prospective feasibility study examining whether a personalized dietary intervention with supplementation of deficient vitamins is feasible in SSA-using NET patients. Several vitamin deficiencies were present at baseline, indicating that standard care might be insufficient. Despite the addition of DIVIT for 14 weeks, which improved vitamin levels in some patients, almost half of patients had one or more deficient vitamin levels after the intervention. This can be due to malabsorption or continuous need instead of temporary use of vitamins. Vitamin supplementation was studied before, like in cystic fibrosis (CF), where patients are at risk for fat-soluble vitamin deficiencies. The restoration of serum vitamin to the normal range after supplementation with vitamins was reported (Jagannath et al. 2015). The doses of vitamin A, E, K and B12 supplementation used in our study were similar with the doses used in other trials; only vitamin K was supplemented during 8 weeks in our study instead of life long. The vitamin D dose used in our study was based on the required dose for adults without adequate sun exposure and higher than the daily recommended dose by the Institute of Medicine. However, patients with vitamin D deficiency due to malabsorption probably need higher doses (Lo et al. 1985). Based on our results in combination with the rapid metabolic turnover of vitamin K, we concluded that probably a prolonged duration of vitamin K supplementation and a higher dose of vitamin D supplementation might lead to restoration of vitamin levels in more patients.

In NET, an association between vitamin D supplementation and OS (P < 0.002) was found (Massironi et al. 2017). Furthermore, our intervention showed minimal effect on QoL, as is seen more often in trials measuring the effect of vitamin supplementation in patients with other diseases (Jagannath et al. 2015).

With the results of the current study, it became possible to design a well-powered clinical trial investigating DIVIT for SSA-using NET patients (Nbib3143946). Primary endpoint of this single arm intervention trial is the proportion of patients with normal vitamin values, measured with quantitative analysis of blood and urine after the intervention.

In conclusion, DIVIT is feasible in NET patients using a SSA. NET patients on SSA are at risk for vitamin deficiencies, which are not easily corrected by dietary advices or standard vitamin supplementation. With the results of the current study, it became possible to design a well-powered clinical trial to determine if an intervention with DIVIT leads to a change in proportion of patients with normal vitamin values.

This study was supported by an educational grant of Novartis to the UMCG. The sponsor was not involved in any part of the study.

Vitamin values over time. Each dot represents the vitamin value of a patient at the specific time point. The line shows the lower reference value for the specific vitamin. 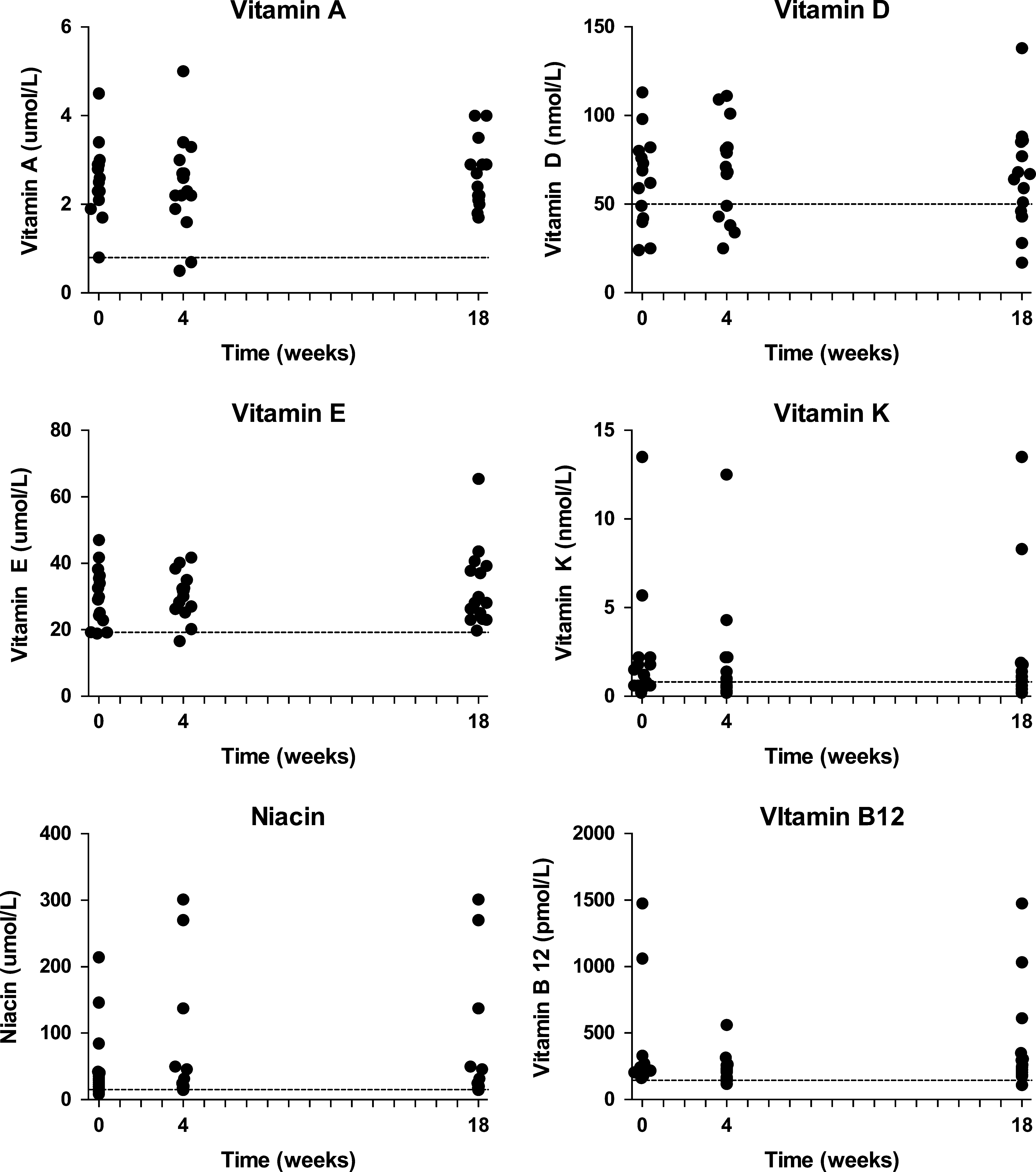