Frequency and consequence of the recurrent YY1 p.T372R mutation in sporadic insulinomas

YY1 mutation analysis and YY1 protein staining in insulinomas. (A) Nucleotide sequence of the tumor DNA and RNA (cDNA) of insulinomas INS3 and INS8 showing the region where the YY1 p.T372R mutation is located (arrows). A heterozygous mutation was detected in the tumor DNA but the tumor RNA (cDNA) only showed normal sequence. (B) Agarose gel electrophoresis of YY1 RT-PCR products using RNA samples from the two tumors with YY1 mutation (INS3 and INS8), and the two insulinoma cell lines (INS-1E and MIN6-4N) that were used in this study. No RT indicates no reverse transcriptase control PCR reactions. Endogenous YY1 mRNA was abundantly expressed in all samples. (C, D and E) The two tumors with YY1 mutation do not show allelic imbalance for the expression of genes near YY1 on chromosome 14q32. UCSC browser image to show genes near YY1 with their orientation indicated by the arrows (C). Highly heterozygous coding region SNPs (heterozygosity ≥ 0.4) were identified in genes located near YY1 using the NCBI Gene resource. Such SNPs were seen in two genes. WARS: https://www.ncbi.nlm.nih.gov/SNP/snp_ref.cgi?locusId=7453, and WDR25: https://www.ncbi.nlm.nih.gov/SNP/snp_ref.cgi?locusId=79446. The reported heterozygosity for the SNPs used in this analysis were: rs9453 (p.L335L, TTG>CTG) (0.379), rs2273800 (p.H149R, CAT>CGT) (0.423), rs3742387 (p.P223P, CCA>CCG) (0.422), and rs13065 (p.Y523Y, TAT>TAC) (0.500). Primers were designed to amplify the specific regions containing the SNPs from DNA and RNA. Genomic DNA and RNA isolated from the two tumor samples with the YY1 mutation (INS3 and INS8) were used for PCR with each primer pair. The PCR products were purified and sequenced. Sequence traces are shown for each SNP. The SNP rs9453 in the WARS gene and the SNP rs2273800 in the WDR25 gene could not be analyzed at the RNA level because no PCR product was obtained by RT-PCR, which could be due to the lack of expression of WARS in pancreatic β-cells/insulinomas and due to the reported alternative splicing of WDR25 (data not shown). The other two SNPs in WDR25 (rs3742387 and rs13065) were informative for both the tumor DNA and tumor RNA to show that the heterozygous SNP observed in the DNA was also present in the respective RNA sample (D and E). (F) YY1 protein (top panels: nuclear) and insulin (bottom panels: cytoplasmic) staining in sections of the two insulinomas that tested positive for YY1 p.T372R (INS3 and INS8) and two insulinomas that tested negative for the mutation (INS7 and INS20). The YY1 protein staining was similar irrespective of the YY1 mutation status in the tumors. The antibodies used were YY1 (Abcam, catalog# ab109237) and insulin (Abcam, catalog# ab6753).

Expression and functional analysis of WT and mutant YY1. (A, B, C and D) RNA and protein expression: Four different mammalian cell lines were transiently transfected with empty vector (V) or plasmids expressing flag-tagged WT-YY1 (WT) or mutant YY1 p.T372R (MUT). QRT-PCR data are shown for the transfected YY1 mRNA expression using primers specific for the transfected YY1 (forward primer in the YY1 cDNA and reverse primer in the vector before the PolyA signal). QRT-PCR data for transfected YY1 mRNA normalized to endogenous Gapdh are shown relative to vector-transfected cells. Western blot analysis of YY1 protein is shown for each cell line next to the QRT-PCR graph, with P84 as the loading control. The antibodies used were: YY1 (Abcam, catalog# ab109237) and P84 (GeneTex, catalog# GTX 70220). The same RNA and protein expression results were obtained when the WT or mutant YY1 cDNA insert was subcloned into another plasmid and transfected into the four different cell lines. (E) QRT-PCR analysis of NeoR mRNA relative to endogenous Gapdh using RNA samples from the indicated cell lines that were used to detect transfected YY1 mRNA. The NeoR cDNA is located on the vector that was used for cloning WT and mutant YY1. Therefore, the level of NeoR mRNA could be used to assess the transfection efficiency of each plasmid construct. Similar level of NeoR mRNA was detected indicating that the difference in transfection efficiency does not account for the different level of transfected YY1 mRNA detected for WT and mutant YY1. (F and G) Cell proliferation assay: INS-1E and MIN6-4N cells were transiently transfected with empty vector or plasmids expressing Flag-tagged WT-YY1 or mutant YY1 p.T372R. Cell number was counted at 48, 96 and 144 h post transfection. 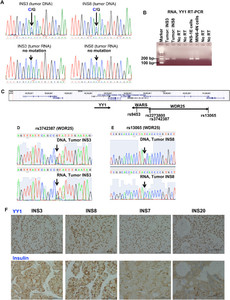