Carney complex (CNC) is a rare multiple neoplasia syndrome, that is either inherited as an autosomal dominant trait, or occurs sporadically as a result of a de novo defect (Correa et al. 2015). CNC is mostly caused by a germline pathogenic variant in the PRKAR1A gene (OMIM 188830), which encodes the regulatory subunit type I alpha of protein kinase A (Kirschner et al. 2000).

CNC is a multi-organ syndrome and it most commonly manifests with spotty skin pigmentation, cutaneous, cardiac and breast myxomas, and primary pigmented nodular adrenocortical disease (PPNAD) associated with an atypical form of Cushing syndrome (CS) (Stratakis 2016). However, patients with CNC may also have other endocrine neoplasms including growth hormone- and/or prolactin-secreting pituitary adenoma(s), thyroid neoplasms, large-cell calcifying Sertoli cell tumors in the testis and ovarian cysts and carcinomas (Courcoutsakis et al. 2013).

We have recently reported a higher frequency of liver manifestations in pediatric patients with CNC, in association with failure to thrive (Tirosh et al. 2018). Liver involvement in CNC has been reported previously in case reports and small case series (Terracciano et al. 2004, Veugelers et al. 2004, Gennari et al. 2008), with some support from animal models, which developed liver lesions in association with abnormal protein kinase A activity (Veugelers et al. 2004).

However, until today liver involvement has not been validated in a large cohort of patients with CNC. Hence, in the current study we performed an imaging-based screening for liver manifestations in patients with CNC. We then analyzed our data that were collected without prior knowledge of the genetics, as per the genotype. Clearly, patients with CNC due to PRKAR1A pathogenic variant had more liver lesions.

This is a retrospective study of 83 patients with CNC, followed between 1995 and 2018 at the Eunice Kennedy Shriver National Institute of Child Health and Human Development (NICHD). One patient was diagnosed, treated and followed at Hadassah-Hebrew University Medical Center and genetic diagnosis was confirmed at the NIH. The NICHD Institutional Review Board has approved the study of patients with CNC (protocol 95-CH-0059); the parents of the patients signed the proper consent forms for clinical and genetic investigations related to the diagnosis of their child.

The diagnosis of CNC was made by using previously published diagnostic criteria (Correa et al. 2015). Genetic sequencing for PRKAR1A defects was obtained in all patients as was previously described (Kirschner et al. 2000). The patients’ medical files were reviewed, and data were retrieved on demographics, medical and family history, physical findings, biochemical evaluation results, adrenal and liver imaging and treatment. Analysis of the imaging files and diagnoses were recorded without knowledge of the genetic testing results.

Examinations of the liver were done using commercially available high MRI and/or computerized tomography (CT) scanners for all subjects. The routine liver imaging examinations were evaluated by two radiologists in consensus who were blinded to genetic results, as above. Both radiologists had at least 15 years of experience in body and liver imaging. Standard diagnostic criteria and methods were used (Sahani & Kalva 2004, Jang et al. 2009). Briefly, cysts are defined as hypodense well-defined lesion(s) on CT with no enhancement in any of the phases of enhancement. On MRI, cysts are T1 hypointense (dark) and T2 hyperintense (bright) with no mural enhancement noted after IV contrast administration. Adenoma is initially hypodense in CT with intense enhancement in arterial phase and wash-out in delayed phases. On MRI the lesion is T1 hypointense and T2 iso- to mildly hyperintense with enhancement pattern similar to that in CT. Hemangioma is hypodense in CT with initial nodular enhancement in early phases and gradual fill-in in porto-venous and delayed phases. On MRI, hemangioma is T2 hyperintense and remain hyperintense in heavy T2WI with enhancement pattern parallel to that described in CT.

DNA was extracted from peripheral blood leukocytes using the Quick-DNA™ Universal Kit, according to manufacturer protocols (Zymo). The complete PRKAR1A coding sequence of the blood samples was analyzed by bidirectional Sanger sequencing, as we have previously described.

The analysis was performed on R statistics (version 3.4.4) via R studio (version 1.0.153). Data were described with simple descriptive statistics. Continuous variables are presented as mean ± s.d. and were compared using the Student’s t-test, while parametric variables were compared using the chi-square test, unless otherwise indicated. Multivariable analysis was performed using logistic regression, including age (categorized to ≤40 years and >40 years), gender, diagnosis with PPNAD and detection of liver lesion. Odds ratio (OR), 95% CI and adjusted P value are presented for each variable in the model. Statistical significance was set at two tailed P value <0.05.

The current analysis included 83 patients with CNC, with an age at last follow-up of 39.3 ± 17.3 years (range 9–75), including 59 females (71.1%). Of 83 patients included in the current analysis, 42 had germline pathogenic variant detected in the PRKAR1A gene, including 15 frameshift mutations, 14 nonsense mutations, 8 splice site variants, 3 missense mutations and 2 unknown types of pathogenic variants.

To better assess the clinical implication of the liver lesion detection in CNC, we reviewed all the pathology reports of patients with reported liver lesions in our cohort. We found three liver tissue pathology reports: one patient underwent biopsy for a liver mass that was diagnosed as focal nodular hyperplasia, a second patient underwent adrenalectomy, with resection of normal liver tissue and the last had metastatic breast cancer with liver metastases, with normal background liver parenchyma.

The prevalence of hepatic cysts and hemangiomas in the general population is debatable due to the high discrepancy in the published literature. Nevertheless, both cysts and other hepatic lesions are increasingly found as a mere coincidence on abdominal imaging techniques, such as ultrasonography CT and MRI (Lantinga et al. 2013). The prevalence of simple hepatic cysts is estimated by 15–18% in the United States (Lantinga et al. 2013) and the prevalence of hepatic hemangiomas is estimated as 0.4– 10% based on radiological findings and autopsy series (Brouwers et al. 1997, Choi & Nguyen 2005, Mocchegiani et al. 2016).

When compared to the general population, the rates of liver cysts and hemangiomas is not exceeding 20%, whereas in our analysis, the rate of liver lesions (mainly cysts and hemangiomas) in patients with a detected PRKAR1A pathogenic variant was 50% and most of these patients (61%) had multiple lesions. Furthermore, multiple liver lesions are rare in the general population and are usually associated with either polycystic kidney disease, affecting up to 0.2% of the general population (Lavö et al. 1990), or isolated polycystic liver disease (has prevalence of less than 0.01%) (Qian 2010).

Patients with multiple liver lesions in the non-CNC context are usually asymptomatic. However, a small fraction of these patients develop acute liver cyst-related complications and/or massive cystic liver enlargement, causing morbidity and mortality (Qian 2010). Currently, the management of symptomatic patients is centered on palliating symptoms and treating complications; however, new therapies are under investigation (Masyuk et al. 2017). The absence of pathological finding in liver pathology reports in patients with CNC in our cohort suggests low clinical implication for this manifestation per se. However, with the high risk found for cardiac myxomas among patients with liver lesions in the multivariable analysis, detecting such lesion should alert the clinician to survey for cardiac myxomas more closely.

Our findings raise a question regarding screening strategies for liver lesions in patients with CNC and in particular in patients with a detected PRKAR1A pathogenic variant. With that being said, the clinical significance of multiple liver cysts in CNC is not known and further investigation is needed.

This analysis is based on the largest CNC patient cohort worldwide. Nevertheless, it has its limitations, including the retrospective methodology and the cross-sectional analysis, with their known drawbacks. In addition, long-term follow-up on the complications of liver disease is required to establish the benefit from screening.

In conclusion, patients with CNC have a high rate of liver lesions, with higher rates in the patients’ subgroups with a PRKAR1A pathogenic variant detected, and specifically in those harboring a nonsense pathogenic variant. Although liver lesions by themselves might not indicate follow-up or intervention based on our data, a closer surveillance for cardiac myxomas development may be indicated among patients in which liver lesions are detected.

This work did not receive any specific grant from any funding agency in the public, commercial, or not-for-profit sector.

The study was approved by the institutional Ethical Committee, and informed consent was obtained from all individual participants included in the study.

Magnetic resonance imaging of the liver of a 28-year-old male with Carney complex showing hemangioma. T2-weighted image showing bright lesion in right lobe of the liver (A). T1-weighted image with contrast in arterial phase showing no enhancement (B) with subsequent filling-in on porto-venous phase (C) and delayed venous phase (D). This pattern is consistent with hemangioma. A full colour version of this figure is available at https://doi.org/10.1530/ERC-19-0517. 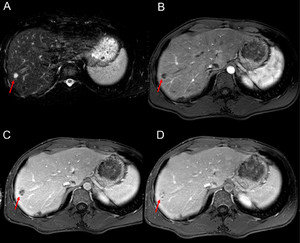